What is really good about Bye? Some cultures don’t even have that phrase in their language. Some cultures only say see you later and leave out all finality as they look to the afterlife. Maybe “see you later” is easier to chew on, but I really don’t think it makes a difference. Anytime a chapter closes there is going to be pain and questions left unanswered.

Miss A and her little bundle, would only remain with our family for a short time. Over the last year, I have assessed and reassessed this chapter in my life until my brain can’t take anymore. I have asked why and why not too many times. I don’t think there are real answers but these are the questions:
Culture differences? She was black. I was white. Acceptance and tolerance doesn’t always mean understanding and ability. I have taken transracial parenting classes and I felt comfortable parenting R and E. However, their prior experiences were with a transracial family and we were able to make easy subtle adjustments to accommodate their needs and cultural norms. It was much more of a challenge for us with A. It was difficult to sort out the cultural needs from the trauma trap. I was ill prepared.

Sibling rivary? My oldest daughter was so excited and so supportive of our family decision to bring Miss A home. However, the reality was much different than the expectations. She had fantasied an older sister that was sharing her position in the family and wished for a bond like that of F and B (my middle and youngest daughter) and never imagined that a power struggle for top dog may occur. It caused isolation and strained relationships and we found trust within the family unit was breaking down.

Two moms? Even in a biological family where mother and daughter have been living together for years, this can become an issue. Two females, raising children and fighting for power can be a disaster waiting to happen. I was responsible for Miss A as her foster mom. This automatically put me the position to be responsible for her baby too. The problem was I didn’t have any legal authority over being responsible for the baby. I didn’t want that, but the problem became that as an adult I have resources and knowledge about what is safe and what is not. When I would try and guide, it was interpreted as taking over and this led to a power and unsafe struggle between the two of us.

After some turban unsafe events, it was obvious that things were not the fairytale in which we had hoped. Miss A yearned for independence and our family yearned for calmness. Heads clashed, things got thrown around and tempers flared. In the end Bye was all we had left. Sadly, it wasn’t Good.

I think about Miss A and the grandchild that I will never know often. My kids have moved on but have not forgotten. How could they? She was their sibling and her baby was their nephew, if only for a little while. We talk openly about the situation and I spend tons of energy on helping them understand and heal.

Would I do this again? I still can’t answer this. I have learned so much from it. I truly loved being part of the birth. I felt I played a role and an important one at that. If it were my pain alone, I would do over again in a heartbeat. I would gladly accept the dance and regret nothing. Only I look at my children and see the pain in their eyes and hesitate. You see; foster children don’t come in a vacuum. I think of the pain of the all others that I witnessed; Miss A and her baby, the other foster parents hoping to follow my lead and all my friends and family who supported me. I guess the answer is maybe.

If one person learns from my story and improves their story than my story counts. 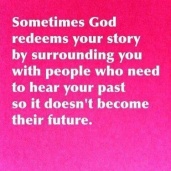 ***I will not post about the next chapter until the time is right. In the meantime, my posts will be about topics and information that will help others maybe understand the next chapter of my life. Just like everything else though, until you put on the shoes and walk the walk, the talk will only be the talk.